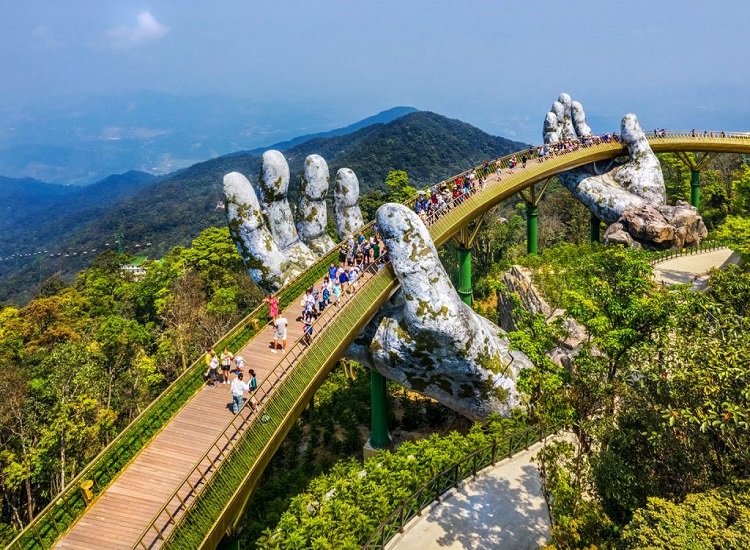 Popularized by the American TV series, China Beach is a stunning stretch of untouched beach.

With 3,260 kilometers of coastline (longer than the American West Coast) Vietnam is a beach lovers’ paradise. Bac My An, perhaps better known to millions through the American television series of the same name, as China Beach, a popular R&R; spot during the Vietnam War is one of the most famous.

Until spring when the Furama Resort opened, China Beach was a sleepy backwater of small local hotels and guesthouses populated principally by locals at play in the cool pre-dawn and twilight hours of each day. Today, the red Vietnamese tiled roofs of the Furama peek out just above the palm trees and pines on this stunning stretch of untouched beach, a reason in itself for choosing to holiday here.

As the crow flies, Danang is barely an hour and a half’s flight from Hong Kong. Dragonair (Hong Kong’s second airline) has just begun its first special charter direct from Hong Kong to Danang, a move that is expected to become a regular service. Thai Airways is scheduled to start direct flights from Bangkok in October of this year. Vietnam Airlines, the national carrier, is also considering direct service between Hong Kong and Danang.

Danang’s airport is capable of landing jumbo jets, a legacy of its military importance, and operates efficiently so that travelers are soon through to the hotel’s transport–an air-conditioned mini-bus. Or, for those who want to get into the spirit of things, a restored US army jeep offers an open-air, if bumpy, ride for the 15-minute drive to the resort.

The resort itself is set in its own extensive landscaped grounds which provide a sanctuary from the frenzied activity on Danang’s roads. The rooms and suites occupy two low-rise wings and are reminiscent of French colonial times. Spacious private terraces offer views of the sea or of the freshwater swimming lagoon. A series of restaurants and bars are all open to the cool sea breezes.

For the active, there is the “Diana Diving Base” which is operated by European diving professionals and provides a complete range of diving services including cave and wreck diving; night diving as well as diving for beginners and advanced divers with certificates from CMAS or PADI. Other activities include tennis, mountain biking, golf driving range, and a variety of silent water sports and fitness classes.

For those who prefer just to relax, swim and sunbathe, the Furama’s terraced, freshwater pools and waterfalls overlook the beach and the lagoon. There is also a health club with a Nautilus gymnasium, steam and sauna rooms manned by experienced masseurs. There are tai chi classes and painting classes in the resort’s own art gallery as well as a fortuneteller who gives consultations by appointment.

In the city itself, be sure not to miss the Cham Museum, which has the finest collection of Cham sculpture in the world. The sandstone carvings are stunning and it is the sort of a place you can easily visit again and again. There is also the impressive Cao Dai Temple.

Danang is within a short distance of four of the country’s foremost cultural and historical centers and is a superb base for daily excursions the ancient seaport of Hoi a just a 45-minute drive through rural scenery southeast of Danang. Here a network of quaint tree-lined avenues packed with Chinese temples and pagodas, street-side cafes and restaurants, tailor shops, art galleries, and colorful markets take visitors on a fascinating tour of traditional Vietnamese, Japanese, European and Chinese cultures.

On the way to Hoi a, Marble Mountain, an enclave of five marble outcrops, is almost within walking distance of the resort. Visitors climb more than 100 steep steps to arrive at a warren of mysterious caves that conceal ancient sanctuaries dedicated to Buddha and local spirits. In the local village, artisans sell striking colored marble carvings for the souvenir collector.

The ancient imperial city of Hue is a two-hour drive to the north. Vietnam’s cultural, intellectual, and historical capital on the banks of the Perfume River is worth a day-trip. The most famous monuments of Hue are its pagodas. The pagodas are generally located on hillsides nestled under canopies of trees and offer a sanctuary for visitors seeking the tranquility of nature. The Thien Mu and the Bao Quoc Pagodas are the most well-known.

A perfect day trip could include an early start to see the sunrise on the mystic temples of My Son. The My Son Valley was once the center of the ancient Champa Kingdom and ranks high in historical importance along with Cambodia’s Angkor Wat and Myanmar’s Pagan.

Dating back to the fourth century, many temples and towers remain for the visitor to explore just 60 kilometers southwest of Danang. Then you can be off to Hoi An to explore the charming streets and Chinese temples by cyclo and enjoy a delicious Vietnamese lunch at one of Hoi An’s riverside restaurants. Returning to Danang, go by way of the Marble Mountain in the cool of the late afternoon.

You Can Choose Your Dream Destination for Enjoyment

The Best Destination in Marrakech for Travel

You Should Know All About England Destination Before Travel

You Can Choose Your Dream Destination for Enjoyment