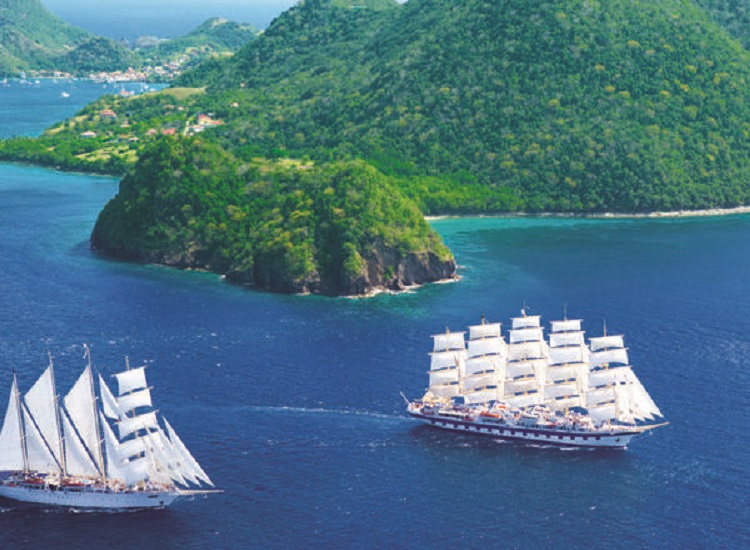 The most visited island off the coast of California, Catalina is also the closest to the Los

Angeles area although this romantic island is only about 32 nautical miles from Marina del Rey, it feels like a million from LA. The pace is much slower and more relaxing than the city. The water is much cleaner than any of the beaches of the mainland. Smog is non-existent.

The Isthmus at the west end can be reached in 4 or 5 hours under sail. This area, also known as Two Harbors, features Catalina Harbor a quarter-mile away on the other side of the island. This is the preferred anchorage and can be reached in six hours. Two Harbors has a little town with a country store, a restaurant, and an outside bar and dance floor featuring a live band on summer nights.

Skin diving and SCUBA diving are very good at Ship Rock at the entrance of the Isthmus. Camping by the sea is permitted for a fee. There are miles of great hiking trails that follow the top ridges of the island for a fantastic panoramic view. Mountain bikes can be rented. Shore boats transport passengers to and from the island in the summer for a fee.

Avalon is the only city on Catalina. It is about 40 nautical miles from the marina and takes about six hours to sail there. The famous landmark Casino is the first thing that you see approaching Avalon. Avalon features many shops, restaurants, hotels, and nightclubs by the bay. Golf, horseback riding, and parasailing are available.

Golf carts can be rented to tour the city and view the area from the mountain roads. There is a dive park near the Casino. Guided bus tours are offered to explore the island’s interior. Outdoor concerts are also performed at Descanso Beach near the Casino in the summertime. Shore boats are available year-round. Avalon is a must-see if you’ve never been there before.

At one square mile, Santa Barbara is one of the smaller Channel Islands. It is a hill- shaped

island about 45 miles from Marina del Rey. Accessible only by private boat, it is much less visited than Catalina. There is one anchorage, a ranger station, and a campground.

We can circumnavigate the entire island before anchoring and see the spectacular sea caves, cliffs, mini-islands, and arches that give this island its character. The water is very clean and clear with friendly, curious sea lions everywhere. Swimming off the boat among the many sea lions at Santa Barbara Island is exciting, refreshing, and invigorating.

The park ranger will eagerly give a hiking tour of the island (the poor guy lives there all alone and really welcomes visitors!). Or you can hike the trail alone which follows the rim of the cliffs and offers fantastic views of the sparkling blue Pacific Ocean.

Located about 47 nautical miles from the marina, Anacapa is a two-day voyage with an

Overnight stop at Paradise Cove in Malibu at anchor, dolphins may be heard spouting around the boat at night. During the sail to Anacapa the next day, schools of dolphins are often seen, many of which will join us to ride the boat’s bow wave for a while. These animals thrive in the cleaner water past Malibu’s Point Dume.

A small island, Anacapa Island is actually three long islands chained together. The arched islet is the first thing you notice upon arriving at the island. Rising straight up from the bottom with sheer cliffs and sea caves, Anacapa is one of the more interesting of the Channel Islands. Sea lions inhabit the many caves at the water level.

There is a ranger station with a friendly park ranger willing to give tours of the island. Many charter boats from nearby Oxnard and Ventura bring divers over to experience the superb diving at Anacapa Island. The clean water allows great visibility. Camping is allowed on the western-most island. The downwind voyage home takes a whole day nonstop.

The largest of the Channel Islands, Santa Cruz is the next island west of Anacapa and

is a multi-day voyage. There are many anchorages and lots to see. The western 90% is owned by The Nature Conservancy and landing is by permit only. Landing is allowed in the eastern 10% of the island without a permit. Camping at Scorpion Canyon is permitted with a reservation.

Santa Cruz Island lies off the coast near Point Conception in the Santa Barbara Channel which is known for being very windy in the afternoon. Sailing around this island in the afternoon can be a rather exciting voyage that only seasoned sailors would enjoy.

Island. This is a multi-day voyage. There are four anchorages and landing is permitted. Camping is allowed at Beeches Bay with reservations.

Santa Rosa Island also lies off the coast near Point Conception in the Santa Barbara Channel and is often very windy. Although sailing to and around this island can be thrilling, it is not recommended for the faint of heart.

San Miguel is the westernmost Channel Island and is a multi-day voyage. Landing is

Permitted only at Curler Harbor Beach – one of only two anchorages this rugged, wind-swept island offers a ranger-guided 15-mile round-trip hike across the island.

San Miguel Island lies past Point Conception and is the windiest island in the Santa Barbara Channel. Only die-hard sailors should attempt this voyage.

You Should Enjoy Your First Sailing