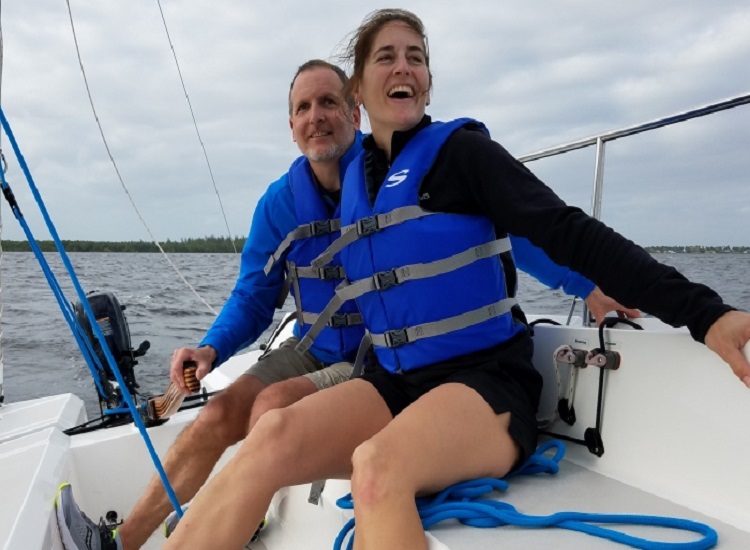 You Should Enjoy Your First Sailing

I was finally able to go out on my first sail about 3 weeks ago. As I mentioned before, I’m lucky enough to have a friend with a sailboat to show me the ropes.  Over the winter he had asked my other friend (also interested in learning to sail) and me if we wanted to crew his boat in beer leagues over the summer. Of course, I said yes!

A few Wednesdays ago we took the boat out for a practice run. Dave showed us around the boat, how to tack, bring up the main and jib, and how to steer everything.  Turns out the basics are very simple, but like everything else, perfection is in the details.

Sadly there was little wind on the river during our practice run. So tacking was very easy-going. I liked it. After a couple of hours on the water (and a couple of beers afterward), we decided we were ready for tomorrow’s first race, a practice race organized by the marina.

To give you the idea of our crew: myself (total knob), my friend (also a total knob), Dave’s wife (an experienced sailor, but first-time racer), and Dave, thankfully he’s been racing for a few years now but first time with his boat.  My friend and I are both in charge of the jib lines, Dave’s wife is handling the rudder, and Dave is on tactics.

The next day had much stronger winds. I wish I would tell you how many knots, but I simply forgot to ask or was too busy concentrating on my task to notice.  The race was pretty intense, our boat was on a crazy angle in certain positions (I forget the name) and I was convinced the whole damn boat was going to tip over.

Tacking was intense; it was definitely a two-man operation.  One guy was pulling the rope around the winch while the other was taking the slack and passing the winch handle when required.

Then, after a tack, we’d run out of the cockpit onto the deck so as to level out the boat with our weight. It was a pretty good workout, to be honest.  Dave was doing tactics, unfortunately, we didn’t really know what the course layout was (based on the flag) so we were just following the other boats (turns out they didn’t really know what they were doing either), so tactics was a bit of a crapshoot.

The good news is we managed to finish the race. The bad news is we came in dead last.  But I had a blast!  I’m still getting the hang of everything and getting used to thinking about everything in terms of wind position, but having loads of fun learning. Beer was well deserved after!

The next race day, one week later, had absolutely no wind. So much so that we didn’t even finish the race. Our tacking is becoming a bit better in terms of timing though and I think we are starting to work a bit better as a crew.  This time we had the rule book in hand and knew exactly what the racecourse was.

Two nights from now we’ll be having our second official race. The goal is to not finish last! We’ll see how that goes.